This week I ran an unscientific Twitter poll asking, “Has DevOps left Ops behind?” It was a question that came up during a discussion with one of my co-workers.

So I've heard this a few times the past month and half and I'm starting to believe it's partly true but, let me ask you. Has DevOps left Ops behind?

There will be more discussion and thought around this for sure. But, it appears the software industry has gotten ahead of the skillsets of the majority of folks in it. Think about it though. We went from containers going mainstream via Docker in 2014 to Kubernetes going mainstream in 2017. Now it’s 2019 and we’re talking about Istio, serverless, and eBPF. If it seems like the pace of change is accelerating, it’s because it is.

In Thomas L. Friedman’s Thank You For Being Late: An Optimist’s Guide to Thriving in the Age of Accelerations a graph is drawn by Google X’s Eric “Astro” Teller like this one here.

Note: DevOps’ish may earn compensation for sales from links on this post through affiliate programs. 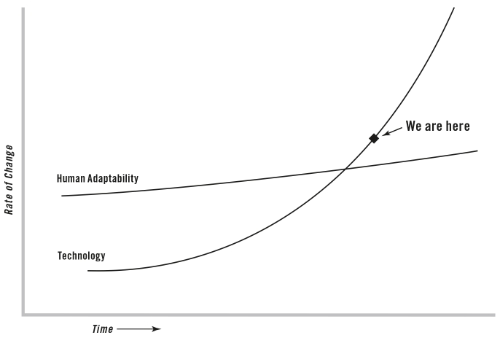 Friedman goes on to explain that the roles of education and government today should be to figure out how to lift the line of human adaptability to be able to keep pace with technology.

This sounds familiar… It’s no surprise that we in tech have been trying to do exactly this for years in tech with things like DevOps and SRE (and many things before that). I think the fact we’ve created “things” (DevOps, SRE, Agile, Lean, etc.) to help us adapt to change faster shows a clear sign the technology is outpacing human capacity to adapt to it. So what do we do about it? Looks like that’s the big question here.

I’m going to add this new top five from the previous newsletter. Hit reply and tell me what you think.

Jenn’s Guide to Thriving in Tech — A well-rounded list of things to do to be successful in tech. One thing I need to work on is time boxing research.

Mainframe brains-slurper sues IBM for ‘age discrim’, calls Ginny and biz ‘morally bankrupt’ — This is disturbing to me because I think we all knew it was happening. But, no one could really do anything about it at the time.

I’m a Red Hat Certified Specialist: Ansible Automation — I did a thing because I felt I had something to prove.

Production Guideline — JBD gives us an absolutely fantastic list of things to go through before making it to production.

Cloud Native Apps Need to be Managed in a Completely New Way — Always be shifting left.

AWS gives open source the middle finger — Boy did AWS ever show all the license zealots out there how quickly their war was gonna last.

China Is Shooting Itself in the Foot Over Huawei — I get it, Huawei is important to China. But, it’s getting to a point where folks are going to think twice regardless.

What is DevSecOps? — A nice, lightweight eBook on DevSecOps from opensource.com.

Why Is Storage On Kubernetes So Hard? — Storage is not trivial. Storage on Kubernetes is harder.

How Tilt updates Kubernetes in Seconds, not Minutes — Tilt is kinda in the same vein as Skaffold. It’s a high-speed Kubernetes deployment/development tool. It introduces something they’ve dubbed a Synclet (a sidecar) that enables easy reuse of existing pods in Kubernetes as opposed to tearing the pod down, rebuilding it, and relaunching the containers in it. Pretty cool looking (I have not kicked the tires on it).

Adventures with a home Kubernetes cluster — There’s more than one way to run Kubernetes, on ARM, in your house.

Google Adds DNS-over-TLS Support to Its Public DNS Service — This will come in handy.

Picking communication tools for your community — I talked way too much about community tools this week. Sadly, no one tool is going to work for everyone, ever. But, there is a tool that meets the needs of most folks. This is why Jenkins is still a thing. ¯\_(ツ)_/¯

8 Productivity Tips for GitHub — I’m starting to get better about GitHub notifications, workflows, etc. I have a confession to make, I didn’t know what version control software was until 2011 and then it was svn. I was anti git until a few years ago. I know how to use git but, GitHub requires its own set of tools to manage.

Git Explorer — Find the right commands you need without digging through the web.

A YubiKey for iOS Will Soon Free Your iPhone From Passwords — iOS will need some work to make this happen. But, I literally can’t wait to be done with passwords.

How to Monitor a Website’s Uptime for $0.75/month on Amazon — Since Pingdom is pulling the plug on their free monitoring, here’s a reasonably priced AWS Route53 alternative. There’s also UptimeRobot which has a great free plan and reasonably priced entry tier.

What’s New in Ansible Tower 3.4 — “We’re most excited about workflows enhancements, job slices, and some other nifty features.” Here’s an interview with one of my all time fav PMs, Bill Nottingham, about this release.

Metasploit Framework 5.0 Released — I love me some Metasploit.

My new magical deployment strategy is:

Notes from this week’s issue can be found on GitHub.