I was struck with a very mild case of heat exhaustion a couple of weeks ago after standing over a hot grill hosting our family’s 4th of July party. So when the article “How hot is too hot for the human body?” came across my desk this week, I was uniquely interested in it. I’ve run several miles in the Middle East, the high plains of Colorado, Florida, the jungles of Honduras, and many points in between. “This shouldn’t impact me like it is.” I thought.

Why is heat such a deadly factor in cooler climates? Why did I get slammed by this one hot day? I discovered, “While most researchers agree that a wet-bulb temperature of 95 °F is unlivable for most humans, the reality is that less extreme conditions can be deadly too. We’ve only hit those wet-bulb temperatures on Earth a few times, but heat kills people around the world every year.”

Oh… “Residents of cooler places are also just less acclimatized to the heat, so wet-bulb temperatures below 95 °F can be deadly.”

Not only that, “Heat acclimatization builds up over time: It can start in as little as a few days, and the whole process can take six weeks or longer.” That likely means that the year-plus spent here in Michigan (with lower than average temps this summer) has made me uniquely suited for a blast of heat being more impactful than ever before. It’s an interesting, potentially life-saving article.

What Is Congress’s Plan to Crack Down on Big Tech?
“A group of bipartisan lawmakers hopes to pass antitrust legislation that takes aim at tech giants buying out competition and hoarding data” This is a very thorough breakdown of the regulations that are currently being discussed in the US Congress.

The 2021 Observability Maturity Community Research report is the first-ever year-over-year look at the observability landscape and how practices are evolving. Read the full report from Honeycomb to learn where your organization is on the observability maturity spectrum and see how organizations on the higher end of the spectrum are realizing benefits like higher productivity, improvement in code quality, 3x higher end-user satisfaction, and software developer retention. SPONSORED

How Susceptible Are You to the Sunk Cost Fallacy?
“Many managers are susceptible to the famous sunk cost effect, whereby they persist investing in a money-losing project even when it makes sense to invest the new money in alternative new projects. The research-based tool presented in this article enables managers to measure that susceptibility.”

Gmail embraces BIMI to authenticate emails with verified logos
Brace yourselves for logos in your emails’ headers.

Why You Should Care About Your Right to Repair Gadgets
“New legislation could simplify tech maintenance and make buying a new smartphone or computer the last resort.”

Are you ready to become a TV company? The future of tech events is media.
I’d take this a step farther past “events” and into everyday life. All the medium-large companies have a live streaming presence these days. OpenShift.TV/Red Hat Live Streaming just past two years of LIVE watch time. Folks tune in live, they appreciate seeing live humans, demo failures, and all the while your people can actually do something a little different but, still kinda the same and have a blast in the process.

Cyber-attack disrupts Iran’s national railway system
“The exact nature of the disruption is unclear, but the outage affected both passenger and cargo transportation services.” This is interesting because after Stuxnet, Iran went to some lengths to disconnect critical services from the internet unless necessary. I wouldn’t be surprised if this were an intelligence operation but, it has a slight dissident feel to it too.

Risk Assessment of GitHub Copilot
“These three example pieces of flawed code did not require any cajoling; Copilot was happy to write them from straightforward requests for functional code. The inevitable conclusion is that Copilot can and will write security vulnerabilities on a regular basis, especially in memory-unsafe languages.” Yeesh. Glad I’ve only enabled Copilot on markdown heavy repos.

The world’s biggest ransomware gang just disappeared from the internet
“The shutdown comes one day before US and Russian officials meet to talk about the ransomware crisis.” Snap, they gone.

If You Want To Transform IT, Start With Finance
Finance is the one keeping you from going to cloud. Finance is the one asking folks to start structuring accounts in a more trackable/specific way. You must build a bridge between finance and IT if you wish to completely succeed.

GitHub URL Hacks
“GitHub’s UI has improved a lot over the years but sometimes you just need quick access without clicking. Here are a few GitHub URL tips to get you data you want faster. One cool thing is all of these tips give raw text output so they work great with curl and other CLI tools.”

Better onboarding: How to prevent codebase overwhelm
Code complexity is increasing, and for new developers joining a team or project, the steep learning curve can be intimidating, confusing, even demoralizing. Learn more about best practices for onboarding and how to get up to speed fast. Read it now. SPONSORED

10 Things I wish I would have known before learning Kubernetes
“When I got started, my main goal was to learn as much as possible about Kubernetes within 100 Days. I am still on this journey. However, since I am approaching halftime, I thought I am going to take a moment to share some of my learning with the community.”

Performance per Watt Is the New Moore’s Law
“The need to decarbonize compute for the sake of our planet means the technology roadmap can no longer prioritize processing power, says Rob Aitken”

Deciduous: A Security Decision Tree Generator
“Security decision trees are a powerful tool to inform saner security prioritization when designing, building, and operating software systems. But creating them has largely involved highly manual tinkering, which is why it’s understandable that I’m constantly asked, ‘Is there an app that my team can use to create them?’ I’m delighted that I now can say ‘fuck yes there is!’ with the release of Deciduous, a security decision tree generator.”

Multicluster Traffic Mirroring with Istio and Kind
“[C]reate an Istio mesh with mirroring between multiple Kubernetes clusters running on Kind. We will deploy the same application in two Kubernetes clusters, and then we will mirror the traffic between those clusters.” Sending a portion of production traffic to staging (for example) is possible with Istio, but it’s not trivial.

Cheat Sheet on Curl Performance Metrics: how to benchmark server latency with curl
curl is such a handy tool. It’s easy to use and has a lot of handy features. “That’s right–even if you ‘RTFM’ (Read the Fine Manual), the curl man page itself is totally unhelpful about the meaning of time_pretransfer.”

How to Install Windows 3.1 on an iPad
I really want to show up to a conference and pull out my M1 iPad Pro with Windows 3.1 on it. I’m not sure if I’ll be able to do that, but I’d love to see the looks on people’s faces.

More Than Five Years In The Making: Creating A New Linux Random Number Generator
“Stephan Müller today posted his latest patch series for LRNG as his proposed new approach for handling /dev/random while being a drop-in replacement with API/ABI compatibility to the existing generator.” This will be change your perception of /dev/random and /dev/urandom in Linux.

QuinnyPig/tailscale-layer
The “why” behind this can be seen in the blog post that attempts to explain it with humor and aplomb.

opensearch-project
Talk about dead simple naming. Elastic won’t get any marketing pointers from AWS it seems.

dineshsonachalam/markdown-autodocs
✨ A GitHub Action that automatically generates & updates markdown content (like your README.md) from external or remote files. 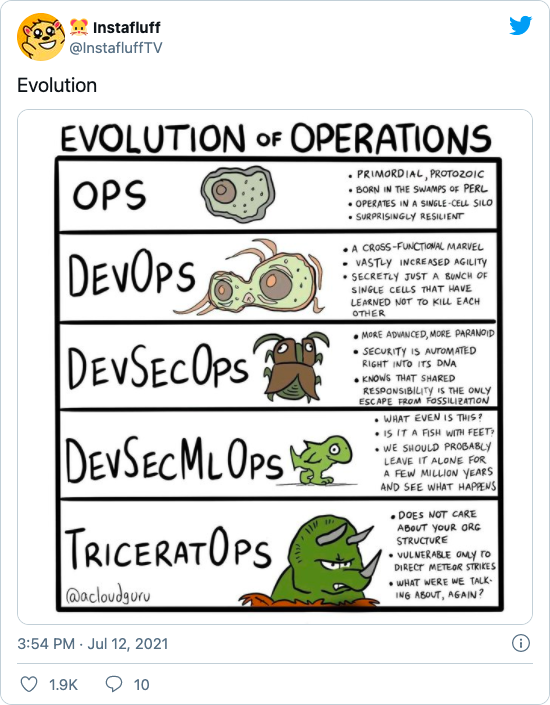